The history filters are another valuable asset of the number generator.
While analyzing various lotteries worldwide, we came to the conclusion that there is a certain relation between previous and next lotto results so we decided that having this set of filters is a must in order to have an efficient number generator. These filters allow the user to set a certain amount of numbers from each generated results to have to be present during the last 100 draws as well as during the whole history of a certain lottery.

Let's see how to use these filters.

Under "During all known history of this lotto", typing 5, respectively 10 in the Min/Max fields located next to the "3 numbers" label, will tell the number generator to return only the combinations that contain 3 numbers that have been among the winning numbers at least 5 times but not more than 10 times during all draws. This means that any generated combination containing numbers 3, 9 and 14 will be returned. If a generated set of numbers contain the numbers 6, 8 and 11 for example, it will only be kept if 6, 8 and 11 have been drawn together at least 5 times but not most than 10 times during all draws.

Changing the Max field from 10 to 9, will tell the system to eliminate any combination with numbers 3, 9 and 14 in it because these numbers have been drawn a total of 10 times during all draws and 10 is not between 5 and 9, right?

The fields under "During the past 100 draws" do the same thing except they ask the system to look at the most recent 100 draws instead of all draws.

Another aspect that captured our attention is the fact that some of the lottery numbers in the next results were drawn previously STRICTLY in the same order. This is why we have enhanced this set of filters to include a way to check if a certain set of numbers from the combinations returned by the number generator has been drawn previously in the exact same order.

Based on the above example, the sub-set of filters on the left (see the Lotto history filters screen-shot) will keep both combinations because they both contain 3, 9, and 14. However, the filters on the right (STRICT history filters) will further refine the generated results and will eliminate the first combination (3, 9, 11, 14, 23, 31) because, although it contains all three numbers, number 11 comes in between. Only the second combination (3, 9, 14, 23, 31, 35) contains the three numbers exactly, as imposed by the strict filters. 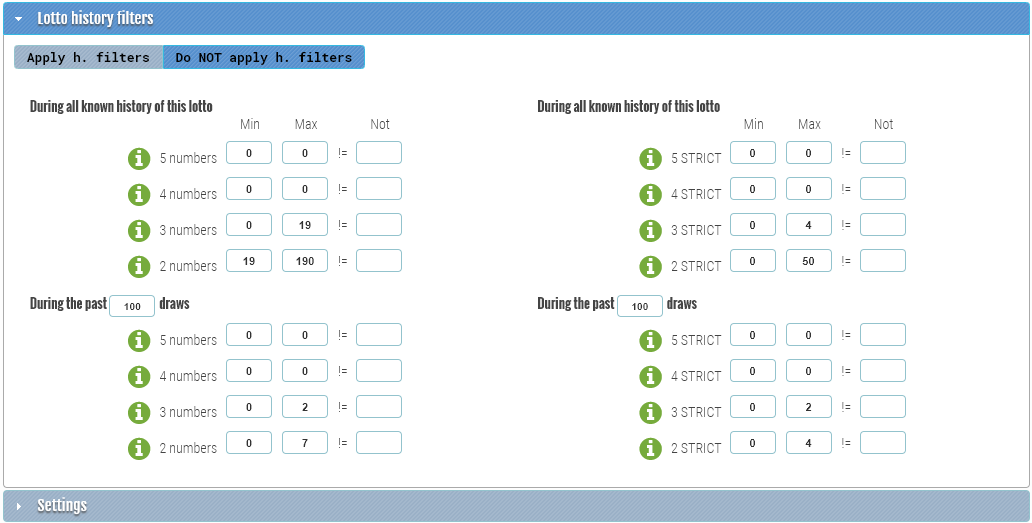 The occurrence of 2, 3, 4 (...and so on) numbers for each lottery result can be found in the Lottery Matrix table. They are the columns on the right, following the "R+N" column.