In the previously discussed number generator filtering section, we have been looking at the Smallest difference and the Greatest difference between two adjacent numbers.

Here, we can take that one step further and define the distances (differences), individually, between any two adjacent numbers.

And... to take it even further than that, the number generator gives you the possibility to even set how many of the spaces can be the same.

By setting the "Space repeat" filter to 1 and 2, the number generator would eliminate the above set of numbers. Reason for that being the fact that it has 3 repeating spaces (5, 5 and 5) and another space, 2, which appears only once.

In order to have the above set of numbers returned by the generator, this filter would have to be set to Min = 1 and Max = 3 (or higher), just as it is in the screen-shot below. 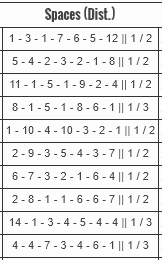 See? The US Powerball has mostly a space repeat rate of 1/1, meaning that the spaces between two adjacent numbers are different.
Euromillions is just a little bit off, spaces being repeated twice sometimes but in the Australia Set For life, an 8/37 lottery system, the spaces are repeated twice most of the time. Even three times here and there.

The space repeat rate for every lottery we analyze is in the "Spaces (Dist.)" column in the Lottery Matrix table.