Is it even possible?

For the first time, it is! And the only proven way to do it is described right on this web page.

This discovery is not only about the lottery numbers. It may actually serve as evidence that we've been looking at randomness trough the wrong perspective until now. It can also have major implications in various fields but I won't discuss those because they are outside of the scope of this writing. I'll just say one thing: Lottery companies need to pay special attention to who plays how many tickets! Especially in countries where there is a lot of money involved, such as the U.S.

It has been thought (and still is at the time of this writing in 2019-09-29) that increasing the odds to win the lottery is impossible. The reasons many came up with were "lottery numbers don't have memory" or "every number has an equal chance to come out next time". And while all this is true, it is possible to increase the odds of winning the lottery -- any lottery -- by eliminating a significant amount of combinations that have a very low chance of being drawn.

The reason why the task of successfully eliminating some of the lottery number sets (combinations) could not be completed until now was, most likely, because most of those who tried were looking at all this from the wrong perspective. Until one guy, the founder of LottoMatic came up with the idea that it is not the numbers that needs to be looked at (because "lottery numbers don't have memory" and because "every number has an equal chance to come out next time"...) but the statistical factors of the number combinations as a whole!

After five years of hard work on what is probably the most advanced lottery analysis system, increasing the chances to win the lottery is not an impossible task anymore. LottoMatic proves it day by day!

So, how can we increase the odds of winning the lottery?

For the sake of providing information based on real data, I will explain how I managed to increase, with 94,83%, the chances to win the Ontario Lottario lottery on 2019-09-28 by eliminating a whole bunch of almost 95% of the total possible combinations. The files containing the winning numbers were, as always, on the Ontario Lottario next results page days before the draw took place.

I should probably mention that the system, working by itself, has a usual elimination rate of about 50% or so but every now and then, it does better, like in this example.

In order for anyone to understand the whole process, I will spare you from complex formulas and such. I'll just provide easy to understand explanations and screen-shots at every step where I consider necessary.

Two things are necessary to achieve the seemingly impossible task. An advanced lottery number generator and a serious set of comprehensive lottery statistics to provide the filtering data for the generator.

While those who visit LottoMatic often may be familiar with these two, others may not so here are some screen-shots.

Number generator at the beginning of the process 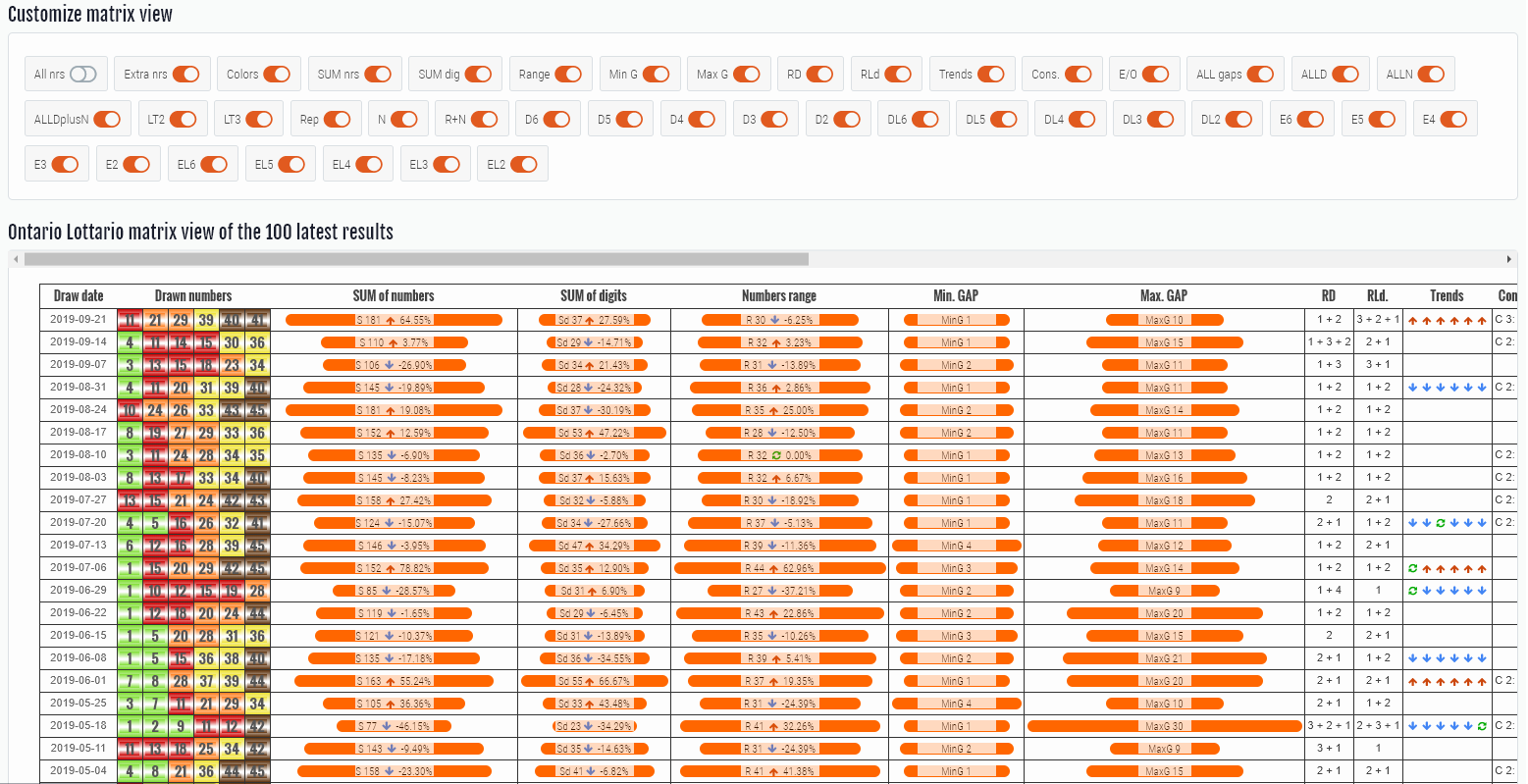 Alright, let's get to it!

We know that the total Ontario Lottario possible combinations is 8,145,060. As mentioned before, I won't get into formulas and such because it is not the subject of this writing. So, that's what we start with. 8.145.060 possible combinations which we want to reduce as much as possible. The more we decrease this number, the higher the chances to win, as long as the winning numbers stay within the combinations that are not eliminated.

Please note the "Sum, Range, Gap & Repeat" settings in the generator screen-shot above. These were the settings I started with.

What these settings do, is to tell the generator to eliminate any set of numbers that has the SUM of its numbers lower than 163 or higher than 206 or equals 181. That's because the SUM of the previous numbers was 181 and I noticed the sum repeats itself on very rare occasions. That's pretty much valid for every lottery I analyzed.

The second slider in the setting forces the generator to eliminate any set of numbers that has the sum of the digits lower than 30 or higher than 44 or equal to 37. And so on and so forth... The screen-shot clearly shows which slider does what. And detailed information is available under section 4 of the number generator.

OK! At this point, I had every setting of the number generator (including those that are not visible in the screenshot above), other than the "Sum of lotto numbers", set to be as permissive as possible. To see how much our initial number of a little over 8.14M would be reduced by applying the SUM filter only.

This second setting helped me get rid of another 572.468 sets of numbers. At this point, the possible combinations are down at approximately 12.66% (1.031.224) of the 8.15M. Don't worry about keeping track of these numbers. There is a table towards the bottom of the page which shows how much the odds have been increased after each step and how many possible combinations have been eliminated.

And I kept moving on and set each filter, one by one, until they all looked as in the next screen-shot.

After setting the range between 29 and 43 but not 30, Only 636.100 possible combinations were kept by the system as possible winnings. So far, the odds have been increased by 92.19%

The "Smallest difference" 1 to 4 got me down another 5.262. Anything counts. Any single eliminated combination translates to odds increase, right? 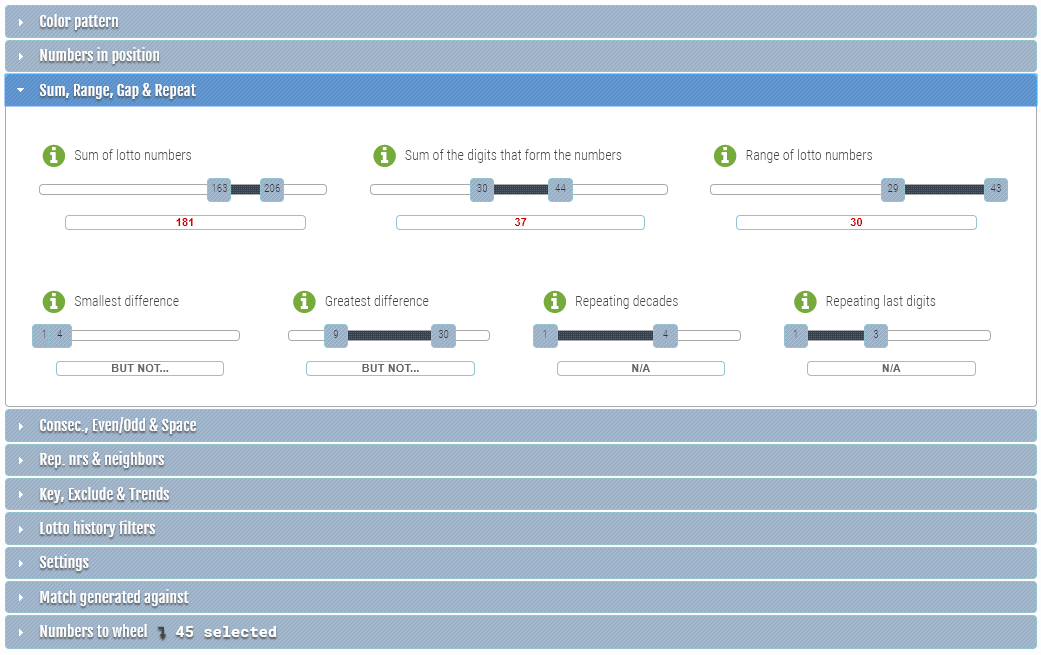 ...and moved on to the "Consec, Even/Odd & Space" filters which I have set so that only those combinations which contain no consecutive numbers, or contain 2, or 3 consecutive numbers, will be kept. Furthermore, I also set the Evens and odds so that every combination can have a ratio of one to five (up to 5 evens or up to 5 odds). Combinations down to 571.535, odds up to ??? 92.98%

And by setting each Min/Max spaces to 1 and 30 respectively, I got another percent odds increase by eliminating some more combos. So, at the end of filtering section 2 (Consec., Even/Odd & Space) I was at 571.333 combinations.

In order to reproduce the filters exactly as they were about one week ago (when the Ontario Lottario prediction files were first made available LottoMatic) I only had to deal with one last filtering section, "Rep. nrs & neighbors".

The final result, as you can see in the screen-shot too:

Which is exactly the number of predictions that were available on LottoMatic since 2019-09-23 for the Ontario Lottario drawing that took place on 2019-09-28. The predictions contained, beside the winning combination of 6 numbers another:

The remaining of 130.164 combinations did not contain any winning numbers. 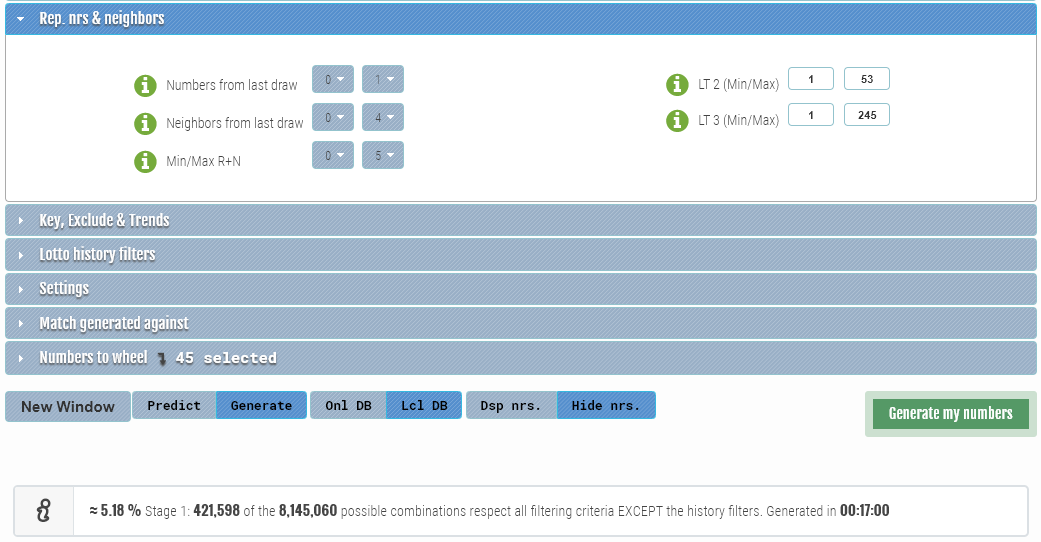 Obviously, further filtering could be applied based on the data provided by the matrix but here I reproduced what the system did by itself for a particular lottery on a specific date.

And this, good people, is the first, and so far the only proven, documented way to increase the odds of winning the lottery.

I welcome you to discuss all this in the forums.